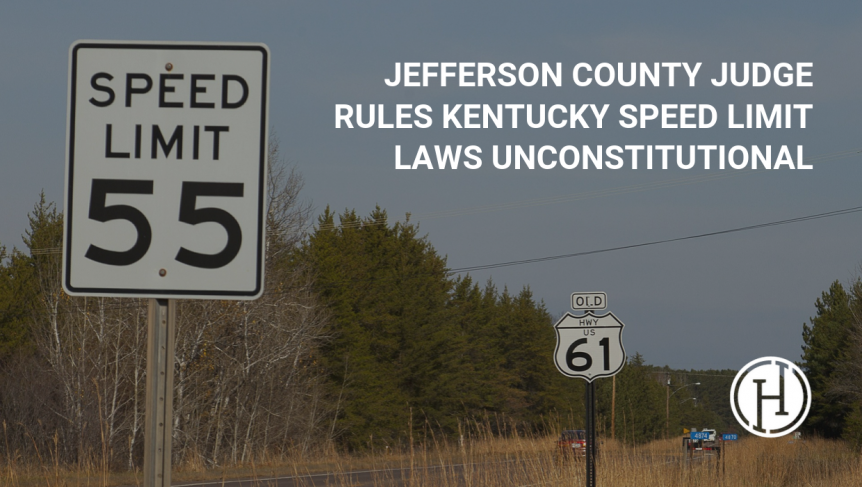 A recent decision in a division of Jefferson County District Court has declared Kentucky’s speeding statute unconstitutional. While that might sound absurd, the reasoning has merit.

For such a statute to be enforceable, the law must effectively inform citizens as to what specific conduct is prohibited. As speed limits vary, the law must clearly communicate how authorities are to determine the speed limit on a particular road and how notice of that limit should be given to motorists.

The existing law, as written, fails on all counts. The portion instructing how speed limits are set is convoluted and impossible to understand. There is no mention of signs as a means of notice.

After all these years, why are we just now learning about the problems with the Kentucky speeding law? The answer is simple. The Jefferson County Attorney’s Office changed its policy on higher speed cases. They quit offering plea agreements that would enable defendants to avoid a license suspension.

Most people charged in these cases are unwilling to simply plead guilty and face a license suspension. Defendants whose jobs and livelihoods depend on their ability to drive are hiring lawyers and fighting the cases in court. As more cases were litigated, the law was more closely scrutinized and the flaws therein were revealed.

While the ruling by this judge only applies in her court, the decision offers a potential defense available in any of the many courtrooms across the state. Some judges will agree with the theory, and others will not. When conflicts between different judges in different courts arise, they must be resolved by an appellate court or by a legislative change in the law or both.

As the issues with the law are being sorted, anyone charged with speeding should hire a lawyer. This is especially true if a conviction will result in a license suspension or impair one’s ability to work and earn a living. If a case cannot be settled to the defendant’s satisfaction, the lawyer should be prepared to advance this or any other defense that might be applicable.

John Harralson with Harralson Law has practiced criminal defense law in Jefferson County, Kentucky for 28 years and has extensive experience with traffic cases. If your freedom is at stake, contact Harralson Law today for a free phone consultation: 502.540.5700